"I don't envy God paradise, because I am well satisfied to live in Sicily." Frederick II of Sicily

The city of a hundred bell towers.

Acireale is undoubtedly one of the most beautiful cities of eastern Sicily.

It is located on the Timpa, nowadays Nature Reserve, a rocky lava slope overlooking the Ionian coast.

Acireale boasts a fantastic panoramic location, being nestled in the Lemon Riviera on the southern slope of mount Volcano Etna.

The architectural and artistic heritage of this city reaches its highest expression in the beauty of baroque churches and palaces, and in the sumptuous 19th century buildings.

The city suffered the terrible 1693 earthquake. It was rebuilt during the 19th century in Sicilian baroque, a well defined architectural style compared to the general characteristics of continental baroque.

The Dome square is the heart of the city. There we find the baroque Town Hall and the Dome, the cathedral of Acireale. This cathedral is dedicated to Our Lady of Annunciation, but commonly attributed to the cult of St.Venera.

The facade of the cathedral is characterized by a rose window and decorations in neo-Gothic style to the design of G.B. Basile, famous architect in Palermo.

Inside the Church we can admire the frescoes painted by A.Filocomo and Pietro Paolo Vasta.

A few steps after, in the Saint Sebastian square, the Basilica of St. Sebastian with its rich baroque facade is the iconic image of the City.

The facade was designed by Angelo Bellofiore from Acireale, it was built in several orders in white stone form Syracuse. A winding balustrade with ten statues defines the prospectus, the combination of friezes, masks, cupids and festoons is a set of rare balance, a joyful hymn to life that only the inspired inventive Baroque could imagine.

Acireale was called "the hundred bell towers city" or hundred Churches for the number of Churches in different districts of the City. 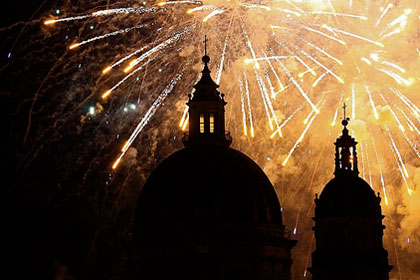 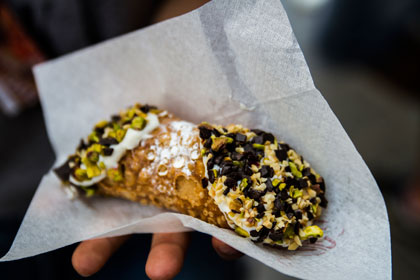 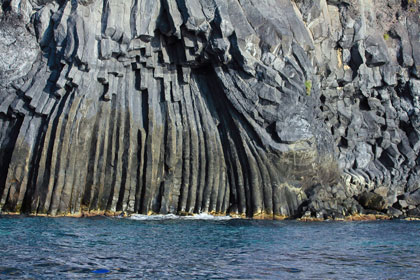 where the Greeks landed

Taormina is one of the most famous places in Sicily.

Atop mount Tauro, it has a panoramic position whose uniqueness is famous all over the world.

The Romans expanded the ancient Greek colony, then Arabs and Normans have left their mark. With its medieval appearance, surrounded by the colors and scents of the Mediterranean vegetation, Taormina is a fine place to visit indeed.

Goethe was fascinated by all this beauty and wrote about this town in his Italian Tour, making it famous for its colorful views and the pictures of Etna, the snowy and steaming volcano that declines until the turquoise sea.

The auditorium of the Greek theatre in Taormina was carved into the rock and subsequently transformed into an arena by the Romans. The theatre offers a spectacular view of the sea to the coast of Calabria and is surrounded by cypress trees and prickly pears.

Catania is at the center of the Mediterranean overlooking the Ionian sea, on the slopes of Mount Etna. The city is unique for the natural setting of a coastline that alternates sandy beaches and rocky shores of lava.

Catania was founded by the Greeks in the VIII century BC. Because of its strategic location and mild climate it has experienced a succession of countless cultures that have left indelible traces of their passage in the heritage of the city. The testimonies dating back to Romans are remarkable.

Among the remains of Roman time stands the Odeon, next to the Greek Roman theatre. The latter building was constructed in Greek times and restored between the I and II century. Other monumental structures belong to the same period, such as the Roman amphitheater in Piazza Stesicoro and some thermal baths made of lava stone.

The king Frederick II of Sicily founded Castello Ursino, a castle on the sea later surrounded by a lava flow in the XIII century, which nowadays is a museum.

The city has been rebuilt at the beginning of the XVIII century, after the terrible eruption of Etna in 1669 and the appalling earthquake in 1693.

Catania is a remarkable example of Sicilian baroque and post earthquake reconstruction. Its historic center has been declared World Heritage Site by UNESCO, along with seven municipalities of Val di Noto. 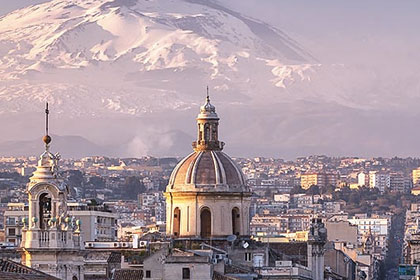 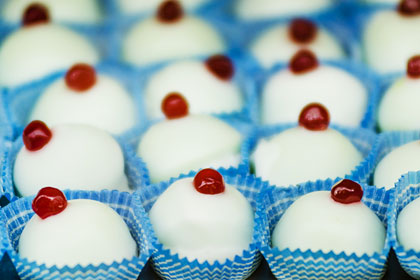 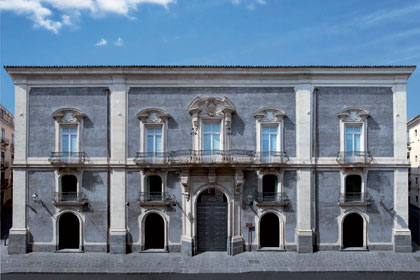 Catania still preserves the urban structure projected by G.B. Vaccarini, with wide straight roads that are connected around the main Via Etnea.

The Fountain of the Elephant assembled by Vaccarini in 1736, can be admired amid the scenic roads overlooking piazza del Duomo, right in the historic city center.

Archetype of palaces in Catania, palazzo Valle is the fairest of civil building project by the great architect Giovan Battista Vaccarini.

This palace was commissioned by Pietro La Valle and projected by Vaccarini in the first half of the 17th century.

The facade fully expresses the creativity of the architect: the graceful balcony, the details and trims, and the imposing front door, give great elegance to the main elevation.

Palazzo Valle has been finely restored and today is back to its original beauty. It hosts the Puglisi Cosentino Art Foundation, that has transformed the palace in a cultural center, home to an intensive program of international exhibitions, cultural events and meetings.

Catania is a city of many faces and remarkable cultural life. 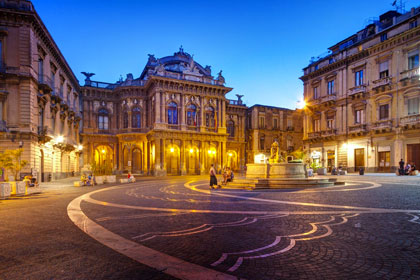 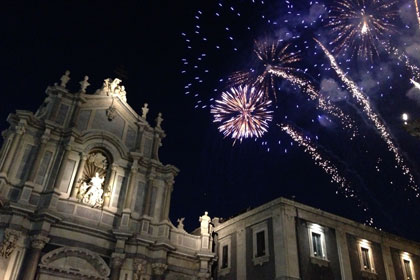 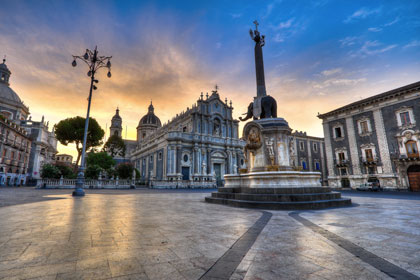 This website or its third party tools use cookies, which are necessary to its functioning and required to achieve the purposes illustrated in the cookie policy.
By closing this banner, scrolling this page, clicking a link or continuing to browse otherwise, you agree to the use of cookies.
Learn more I understand